One of the difficulties of dealing with auto injuries is the fact that some occupants experience injury, while others—sometimes in the same vehicle—do not. The reason for this is that there are literally dozens of variables that determine whether or not any individual person will be injured in a car crash.

These variables range from the size of the car, to the type of head restraints, to the unique anatomy of the neck of the person in the car. Because of these many variables, it is impossible to say that any particular person can or cannot be injured in a collision. What we can do is know who is at the most risk of developing symptoms after crash, as that can help us get the proper treatment for those patients.

A new study from leading whiplash researchers in Sweden adds to our understanding of auto injuries by examining the role of where an occupant sits in the car as a risk factor in being injured:

“The risk of neck injury in the rear seat is rarely studied. The following studies describe the risk of initial neck injury. Based on initial whiplash symptoms reported, to an insurance company, Lövsund et al. (1988) found a 50% lower risk in the rear seat compared to the front seat in rear impacts, when sex was taken into account. In another study by Berglund and colleagues (2003), the relative risk of reported, initial symptoms was over 40% higher for occupants in the passenger front seat and nearly 80% higher in the driver’s seat, compared to the rear seat. Otremski et al. (1989) also found a lower risk of initial symptoms in the rear seat compared to the front and driver’s seat, but the study did not separate the risk for different impact directions. No study mentioned above has controlled for crash severity in the investigated crashes.”

The goal of this current study was to determine injury risk factors of different seating positions, controlling for crash severity.

The authors examined the insurance company data from 195 rear-end crashes that included both front- and rear-seat occupants and where at least one occupant sustained permanent disability. The information on seating position was collected from the insurance data for injured patients, and from questionnaires for the uninjured occupants. After the data was collected, it was analyzed statistically to determine risk factors. 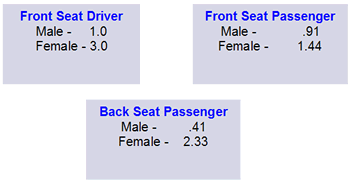 The preceding diagram illustrates the study findings. The number represents the risk ratio for the particular gender and position. For instance, a risk ratio of 3.03 means that that women in the driver’s position would have three times the risk of injury as compared to a male driver.

This study has a number of important findings:

This is the first study of it’s kind to examine the role of seating position with risk of injury after a rear-end collision, and future study is necessary to determine why certain positions are more dangerous for female passengers. But this study can be useful for clinicians and attorneys at explaining why the patient might experience injury while another passenger in the crash experienced no injury.

Krafft M, Kullgren A, Lie A, Tingvall C. The risk of whiplash injury in the rear seat compared to the front seat in rear impacts. Traffic Injury and Prevention 2005;4:136-140.