Traumatic brain injury (TBI) is a complex issue for a variety of reasons. First, many cases of TBI go undiagnosed for months or even years. Since patients with head injuries often times have other injuries, the brain trauma may not receive the attention it deserves.

Another problem with head injury is that it often results in psychological symptoms that can complicate the diagnosis and treatment. Traumatic brain injury can result in depression, changes in personality, anxiety, paranoia, or apathy. One of the most frustrating and challenging symptoms is aggression.

The authors of a current study on aggression after brain injury stated the problem succinctly:

“Associations between TBI and neuropsychiatric disorders have been recognized for many years. Aggressive behavior is one of the most socially and vocationally disruptive consequences of these neuropsychiatric disorders. Aggression endangers the safety of patients, families, and caregivers. It may prevent patients from receiving the care that they need and disrupt their rehabilitation process. Estimates of the frequency of aggressive behaviors during the acute period after TBI have ranged from 11% to 96%.”

In this study, the researchers assessed 89 patients with TBI and 26 patients with multiple traumas, but without TBI. All of the TBI patients in the study had post-traumatic amnesia that lasted at least 30 minutes. 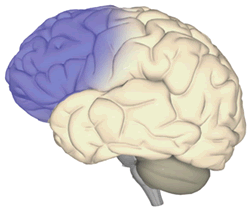 The frontal lobe (shown here in blue) regulates higher “executive” functions of the brain, such as conscious thought, memory, intelligence, concentration, behavior, and personality. Injury to the frontal lobe can result in aggression in some patients.

Clearly, patients with a history of closed head injury and aggressive behavior are at a disadvantage when it comes to receiving proper treatment and vocational rehabilitation. The authors of this current study conclude:

“In summary, aggression following TBI is associated with multiple biological and psychosocial factors, including major depression, substance abuse, and impaired social function as well as the presence of brain injury involving the frontal lobe. These findings suggest that interventions aimed at treating major depression or substance abuse and improving social function may help reduce episodes of aggression in patients who have suffered traumatic brain injury.”

Aggression after an injury may be due to brain damage. Patients that show signs of aggression should be carefully evaluated for the existence of head injury, and proper treatment should be sought out.